HISTORY OF THE INSTITUTE 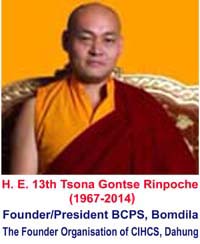 Central Institute of Himalayan Culture Studies (CIHCS), Dahung, West Kameng District, Arunachal Pradesh was established as an aegis of Buddhist Culture Preservation Society (BCPS), Bomdila under the Presidentship of H. E. 13th. Tsona Gontse Rinpoche and commenced its first academic session on the 4th August, 2003, and is affiliated to Sampurnanand Sanskrit University, Varanasi, U.P. The Institute has got registered under Society Registration Act 1860 vide registration no. SR/ITA/4650 dated 10-11-2010 Itanagar, Arunachal Pradesh, and has become an Autonomous Body of the Ministry of Culture, Govt. of India.

The then Department of Culture, Government of India took the initiative to establish an institute of Himalayan Culture Studies to help the people of the region in preservation and promotion of their cultural identity and the growth of traditional arts, crafts and sciences and other genres of indigenous knowledge. Acting upon this objective, it constituted a Task Force in August, 2000 to formulate a concept note and to chalk out modalities for setting up a Buddhist Institution in Arunachal Pradesh.

Till the time of the constitution of a separate Board of Management of Central Institute of Himalayan Culture Studies (CIHCS) and its registration, the Buddhist Cultural Preservation Society (BCPS), Bomdila was entrusted to take up the initial work by the then Department of Culture, Govt. of India based on the recommendation of the Task Force.

Consequent upon that, the EFC meeting was held on 8th October 2009 and finally the Union Cabinet accorded approval for the establishment of CIHCS at Dahung in West Kameng District of Arunachal Pradesh as an Autonomous Body under the Ministry of Culture, Government of India on May 19th 2010.

The mandate of the Society is to undertake Under Graduate, Post Graduate and Doctoral Programmes in Buddhist and Himalayan studies and may also establish and maintain feeder schools.

Currently, the Institute is running the courses as per the patern of SSVV, U.P.

Affiliation of the Institute for Purva Madhyama to Shastri and Acharya to Ph.D Programme in Bhot Boudh Darshan has been granted by Sampurnanand Sanskrit Viswavidyalaya (University), Varanasi, U. P.

Admissions to various classes are undertaken during June-July and the academic session starts form July-August.

Annual Examinations of the various classes is being conducted by Sampurnanand Sanskrit University, Varanasi during the period April-May.

Prospects for new courses and programmes:

CIHCS, Dahung has emerged as a Post Graduate Institute for imparting Higher Education which shall also carry out the research programmes up to Ph. D. Level.

CIHCS, Dahung has been established by the Government of India to undertake Undergraduate, Post Graduate and Doctoral Programmes in Buddhist and Himalayan Studies and may also maintain feeder schools as mandate and also to provide for instruction of various courses in Indian Culture and for Studies and Research in different branches of Buddhist Philosophical and Cultural Studies, Bhoti language and literature along with Himalayan Culture studies for Degrees and Diplomas and to teach traditional Arts & Crafts and modern technical skill sets. Hence, in near future the Institute is to be upgraded as a Deemed University.